Skip to content
All books are available from me directly. Please contact me for more information, or to place an order.

Buy direct from me via email please

The collection takes its title from the work of mathematician, Christopher Zeeman, who encouraging the application of mathematics to behavioural science. His catastrophe machine was a physical manifestation of Catastrophe Theory, which Konrad Lorenz drew on and extended to apply to human behaviour.

Amongst the poems here is a set of “machine poems” — ‘Washing Machine’, ‘The Difference Machine’, ‘Knitting Machine’, and ‘Life Support Machine’ among them — which act as metaphors for human behaviour and are rich in social and historical context.

Other poems extend the themes of both the machine and human motifs. A wife retrieves herself from a controlling husband by reversing the order of words; a man, two years, from retirement is taunted by sparrows playing in a gutter while he does physiotherapy exercises; a mod’s handmade brogues symbolise social mobility; a reservoir drains away in the night, its drowned village’s occupants stirring back to life at dawn, …

You’re here he says smiling
in the fold
on the cusp of catastrophe
where I’ve written growl.

“In Stag’s Leap (2012) Sharon Olds invites us to share every painful breath of her divorce. Figura is more reticent and at the same time deeper, combining playfulness with a fearless generosity that makes this an enriching, unforgettable read.”
-Rosie Johnston, London Grip

“… Wonderful, poignant, remarkable poetry – absolutely bowled over by it…….. it’s a wonderful book: reads like a novel. … have been recommending it to lots of my students too.”
-Jonathan Taylor

“On first reading they are deceptively spry, revealing in the absurd, even funny details of ordinary life….. an impressive book, almost childlike in its honesty, written from hard-won experience and crafted with great skill, tackling dififcult themes with grace and self-deprecating bravado, which is very appealing.”
-Pippa Little, Magma

The pamphlet is an oblique response to a commission from film-maker Dominic Clemence http://dominicclemence.tv Shed follows the strange but familiar place of the shed as it morphs from ‘facedown book’ to ‘Wunderkammer, spider’s web, matryoshka’ in a witty and mercurial investigation of Shedness. Beautifully illustrated by Natty Peterkin,

Sheddism noun shed*izm belief that beauty and fulfilment
are found in solitary hours and the occasional performance
of useful tasks (should you so desire); that one’s existence
can be established through the hoarding of useful objects;
that true evil is the disposal of anything, however broken.

“… Inside, more artwork. These are Natty Peterkin’s full page responses…I could quote from every stanza, finding new connections between them: I don’t have enough space in this review. So, buy this, and read it. Treasure it. And, for the third time, it is all beautiful.”
-Davina Prince, Under The Radar

“I haven’t read a pamphlet as exquisite as this for some time. … In Figura’s hands the shed becomes poetry itself – a beautiful, primitive, sacred and (usually) solitary thing. …… skips away from any solid definition. Shed is being. Shed is fear. Shed is secrets. Shed is love, death, life.”
-Robert M. Francis Sphinx

The poem Victor from it won the Poetry Society’s Hamish Canham Prize in 2010. The collection along with the Spoken Word show was shortl-listed for the 2010 Ted Hughes Prize for new work.

My mother and I pose in Sunday best
in front of a cottage with roses
around the door. She dreams

it is our house, where white gloves
will not be smudged or snagged on a thorn
and be left with a pin-prick of blood.

I could print this photograph
so dark, there would only be
her hand on my shoulder.

“Martin Figura’s riveting sequence of poems about his childhood, his father killing his mother, and the consequences of that upon the whole family is remarkable for the story he doesn’t tell, as much as for the story he does. Exercising a humanising restraint, delicately balanced, these poems are an attempt to excise memory, to fill in some of the missing gaps, but the sense one is left with most of all is absence and loss. Moving, brave unsentimental, Whistle doesn’t blow the whistle on the family. Instead it rather heartbreakingly tries to piece together the fragments of a life, shattered by murder. Sometimes lyrical, rarely angry, often tender, Figura’s soul mate throughout is the understanding and watchful eye of the camera: ‘One day I shall hold them with white gloves,/carefully brush away the dust and look/through their shadows and fingerprints.”
-Jackie Kay

“A rare gift, his photographer’s eye and poet’s ear tell his story with candour, restraint, and perfect detail…”
-Gillian Clarke

“…..scrupulously expressed and rewards even further re-reading as a description of how it feels to have your childhood wholly destroyed; how it feels to be aware of the finality of that obliteration; and how it feels to stare across, as through a film, to a far shore from which you’ve departed forever. …Of all the books of poetry I’ve read this year, Whistle is the one that haunts me most. It touches a place within you that will never heal. You push it away like a ghost. You pull it towards you in memory.”
-David Morley, Magma

“… a record of personal survival and renewal after the very earth of life and love has been scorched and devastated. Figura, keeping his nerve, guides us through a limbo of shifting and shadowed memories, through places where the encroaching Furies rampage, out into the clarity of comprehension and forgiveness, where it is possible for him, and for us, to claim life’s paradoxical riches.”
-Penny Shuttle, Ink Sweat and Tears

“………Last, but certainly not least, there was Martin Figura’s Whistle. …. a collection that’s genuinely uplifting and (this actually makes you feel guilty, at first) hugely enjoyable. It’s a genuine poetry page-turner, but for all the right reasons, with Figura’s precise, restrained telling of a story of family tragedy deserving great praise.”
-Matt Merritt, Best Poetry of 2010 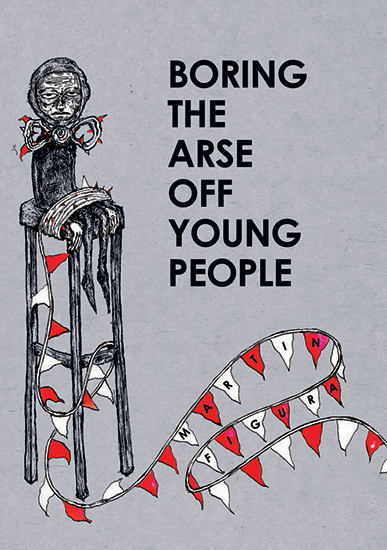 Boring the Arse Off Young People

The Pamphlet is the result of a commission from Artist Caroline Wright.

Arthur was born three weeks premature , between the wars. 28th April 1923 to be precise, whilst his father was watching his beloved West Ham lose two nil to Bolton Wanderers in the first Wembley FA Cup Final. Arthur loved his parents and he loved buses and boats. He grew up as quite an odd, but happy boy. The Second World War broke out when he was sixteen years old and changed his life.

It’s her wild black hair and bare feet,
the way she unfurls a red blanket
onto thistled grass, the basket’s
rationed sweetness, that has Arthur
holding his breath under the ash tree.

“….it is those cinematic details that hold you – the image of a little man in his ARP uniform who finds “a dead man propped in a doorway/ the High Street broken apart” who yet just “bends his back to the rubble as the gulls regain their voices.”
-Geoff Sawyer, Magma

“Punchy and sensitively told, Arthur delves into the destructive impact of war on human relationships, with much to admire in its honest and assured language. If only the pamphlet were longer.”
-Jennifer Wong, Sphinx

A Happen Publication 2007
View and Buy

A nice little catalogue of my exhibition of project in Dunstable. There’s an essay of mine in it that I’m quite proud of.

You can purchase it by contacting me.

Photographs of the British Army. Essays by Liz Wells and Antony Beevor with an introduction from Billy Bragg. It had two colour supplement spreads and was exhibited at Side Gallery, Bristol Watershed, Norwich Arts Centre and other venues. Images were included in group shows at The National Portrait Gallery and The Photographers’’ Gallery and several are held in the Imperial War Museum Collection.

A fiver will get you one of the remaining copies. Contact me.