There are times when you crave a quiet night in, we’ve been caning it since the 12th March, when Byron Vincent was in town and so there was a duty to go to the Cider Shed with him and Molly and others and end up back at Molly and Joe’s etc etc. I was photographing Molly and Byron the next day for their Edinburgh show, so much fun dressing up and being daft next day with hangovers. Then off to Tom and Juliet’s and their splendid new house, for supper with Angus Sinclair (wrestler and poet) and winner of Cafe Writers Commission for 2010. It was perfectly civilised until the wig box came out, then it went weird pictures on Face Book – (I’ve a professional reputation to maintain here). I’ll spare you the details, but it’s been ten days of hard living and I’m too old. The Literary Death Match was a highlight with an audience out to enjoy themselves and sharing the stage with Robert Popper, Rowland Rivron and Miriam Elia. It was massive fun and we partied on after. I’m far too modest to reveal the result. Ben Meadows took some great photos. I’m slightly embarrassed, in that we spoke on the night and I may have given him advice and now I’ve seen the pictures and his web-site; he needs no advice from me, quite the reverse. 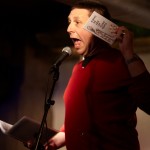 Having recovered from that it was Norwich Arts Centre with Tim Wells and Steve Larkin. Tim stayed over at the Butchery and it was 2am before we called it a night. But being professionals we were up at 7am for blueberry and banana pancakes; Tim heading off to St Albans for his next gig and me for a day with Hannah Walker at Costessey Junior School with Year 5. We’re blessed with two brilliant teachers who are really engaged and supportive and 2 classes of kids that are simply wonderful. I had so much fun the hangover didn’t really kick in until I got home. It’s a quiet night in tonight and tomorrow night, then London for the Hughes Awards, which I doubt will be a quiet night, however it goes. All in all by the time I get to bed on Thursday I will have had one of those weeks when you want to be asked to do a week in the life of column, but no-one has asked.

View all posts by Martin

My Name is Mercy