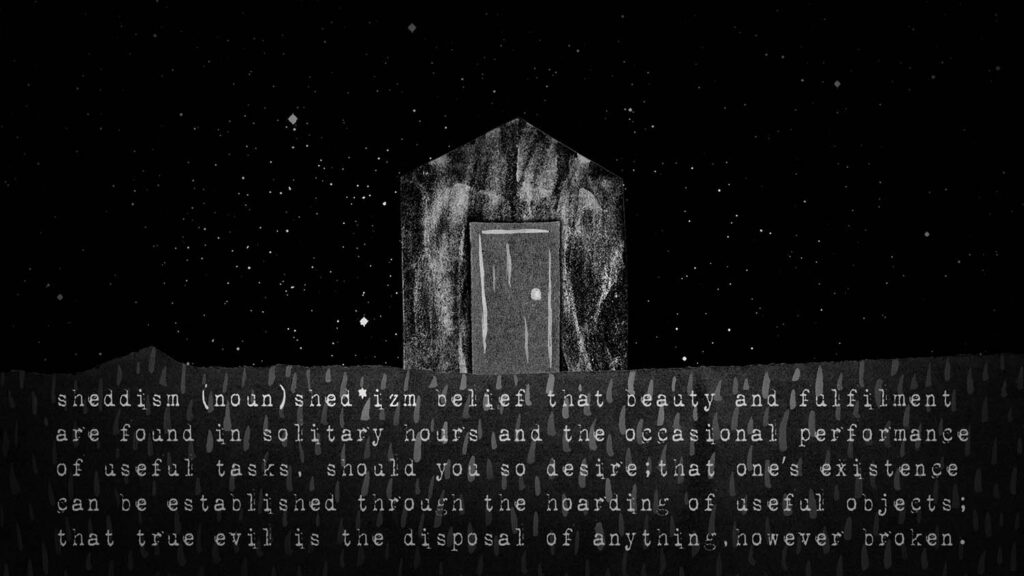 In 1995, during the last hour of his life Jack drifts between fantasy and reality in the hut that has been his home for over fifty years.  Jack had manned a lookout tower as war flashed over the invasion threatened Suffolk Coast and married a French refugee.  He recounts the loss of his father at Dunkirk and his young wife in a bombing raid.

He finds solace in a physical and psychological retreat into the perceived safety of a constructed world of obsessive ritual and hoarded totems.  Renewal comes through raising a son he unwittingly inspires to become an artist, who goes on to help him navigate the outside world.  Shed examines war and its legacy.

Shed was commissioned by Norwich Arts Centre and Théâtre Volière for the 2020 Marchland Season as a double bill with The Turkey Carpet’s.  An invited showcase at Norwich Arts Centre was also planned.The two stories overlap on the Suffolk Marshes.  This allows for the concept of a shared set, with some shared characters.  Both examine personal issues around conflict, memory and grief, within the context of our ongoing collective historical and political relationship with Europe.  Sadly the events fell victim to the lockdown that was brought in the week of the planned performances.

The show is complete though and ready relaunch itself once this is possible.  Lucy Farrant produced a one-man adaptation showcase performance of Shed with Norwich Arts Centre (NAC)  to an invited audience for feedback, informing its development as a stand alone touring show and in devising related activities suited to prospective venues.  The show will be developed as a two-person show with recorded original music for planned initial performances at Norwich and Colchester Arts Centres in March 2022, with future touring in mind.

Shed’s subject matter and use of artefacts provide an opportunity for creative workshops drawing on personal memory, history and place.

A short Promo filmed at an early rehearsal.

My Name is Mercy